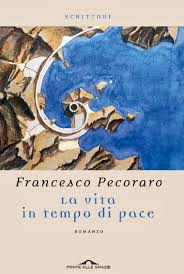 The latest addition to my website is Francesco Pecoraro‘s La vita in tempo di pace [Life in Peacetime]. Though somewhat long-winded, this a worthwhile novel about Ivo Brandani, an Italian civil engineer. At the time of writing – May 2015 – he is sixty-nine and working for a company that is installing fake coral in the Red Sea. The story takes the form of his journey out of the part of Egypt he is in and looking back on his life, as he travels to the airport, waits for the plane and flies. As the title states, he was born just after World War II. He initially studied philosophy at university, where he was involved in the student demonstrations of the time but switched to engineering, particularly after a holiday he took to Scotland, with Clara, his girlfriend and, later wife, to see the Forth Bridge. But what makes this book interesting is Ivo himself and his views of the world. He has a few obsessions – wondering why Byzantium fell to the Ottomans in 1451, looking forward to the Apocalypse, and the possibility of being killed by Naegleria fowleri, the brain-eating amoeba, are just a few. But he also assumes that a catastrophe is always about to happen, whether it is a pan catching fire on a stove or a plane crashing. He does not like the way the world is going, despite the peace. He does not like the fakery and the obsessive money-grabbing, despite the fact that the firm he works for is heavily involved in both. His only joys seem to be the Island, a Greek island he and Clara discovered, and sitting in an airport, after security, waiting for the plane to take off. Inevitably this book is about the Italian economic crisis and that certainly features in this book. It is not a bad book at all, despite the fact that a bit of editing would have been worthwhile. Unfortunately, it has not been translated into any other language as yet.