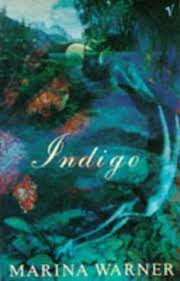 The latest addition to my website is Marina Warner‘s Indigo. This novel is loosely (at times very loosely) based on the plot of Shakespeare’s The Tempest. There are two stories being told, both concerning the fictitious Caribbean country of Enfant-Béate. The first starts just before the British take over the country. We follow Sycorax (a witch in The Tempest) who is a witch/healer/counsellor and who also develops the technology of indigo dyeing, which the British will steal from her. She is joined by a both a Caliban and an Ariel. Caliban is Dulé, the baby of African slaves who have been thrown overboard, but he somehow survived and was rescued by Sycorax. Ariel is a girl in this novel and she is the daughter of Arawaks who have been captured but subsequently died and Sycorax has taken her in, too. Ariel becomes Sycorax’s assistant while Dulé grows up and joins the men on the neighbouring island who fish and hunt and, later, fight the British. Everything goes wrong when the British under Kit Everard arrive. Everard is not a bad man and a good Christian but he sees the ‘savages’ as inferior and the island ripe for exploitation.

The second story concerns his descendants, who now live in London. Sir Anthony Everard, based in name on Antonio of The Tempest, is an old-fashioned gentleman and former master of The Game, a sort of cricket game but involving much more stealth and strategy than cricket. His son Kit is named after his ancestor but is a fairly-low key person. His daughter is called Miranda but she does not really resemble the Miranda of The Tempest. Kit’s mother drowned and Sir Anthony has married Gillian, a much younger woman, and their daughter, Xanthe, is much more lively. We follow Miranda and Xanthe as they grow up but not much happens till Xanthe’s friend takes them all to Béate-Enfant, where he has developed a high-class health farm. During the celebrations for the 350th anniversary of the settlement of the island, there is an uprising, as Warner shows us that exploitation of the island and the islanders still carries on. Warner makes much of the myths of the island and the comparison between the culture and values of the islanders and the British. It is an excellent book, even if the story of the contemporary Everards does tend to drag at times.