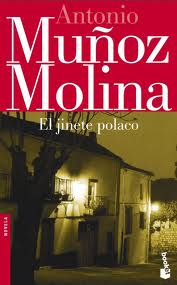 The latest addition to my website is Antonio Muñoz Molina‘s El jinete polaco [The Polish Rider]. When it was released in Spain in 1991, it garnered a lot of critical praise and sold well, despite its length and complexity. It tells the story of Manuel, a thirty-five year interpreter who has drifted round the world in his job, at least in part to escape from what he considers the dull provincial town of Mágina. He welcomes the freedom this brings but he is not happy. One day, he meets an American woman, Nadia, who turns out to have Spanish parents, and whose father also came from Mágina. They settle down together and Manuel tells Nadia his story and, with the help of a trunk of old photos Nadia has inherited from her father, they reconstruct, not always accurately, the stories of Mágina. This novel is essentially a Proustian novel of memory and reconstructing (and, in some cases, rearranging) memories and is superbly told by Muñoz Molina. Can we be a complete person without our past and our memories of our past? Clearly not, in Muñoz Molina’s view. The title, by the way, comes from a print Nadia’s father has of Rembrandt’s The Polish Rider. Sadly, though available in seven other languages, it has not been translated into English.