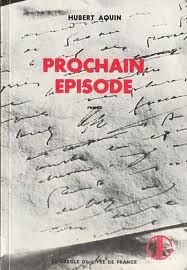 The latest addition to my website is Hubert Aquin‘s Prochain épisode (Next Episode), Aquin’s first novel and the only one of his works to be translated into English. Aquin wrote this novel when he was detained in a mental institution after having being arrested for possession of guns, to be used in terrorist attacks as part of his involvement in the Quebec liberation movement. The story tells of an unnamed narrator, clearly based on Aquin himself, who is in Switzerland and worried about his life and whether the Canadian police are tracking him. He meets his girlfriend K, who is also very much involved in the revolutionary movement and he is instructed to follow and kill a counter-revolutionary who may be a Belgian banker called von Ryndt or a Swiss banker called von Heute or von Heutz. While our narrator does follow and confront von Heutz, he is not very competent and things do not go according to plan. However, the fascination of this book is not the James Bond exploits of the narrator but his thoughts, concerns and worries about his life, his love and where he is and what he is doing. It has been hailed as a great Canadian novel and, though I do not feel that it deserves that acclaim, it is still an interesting read.