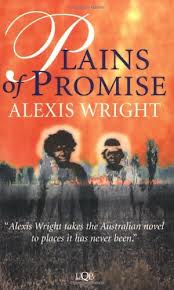 The latest addition to my website is Alexis Wright‘s Plains of Promise. It is about the (poor) treatment of aborigines, both now and in the 1950s. The first part is set in a mission in the north of the country, where the mother of seven year old Ivy Koopundi has just killed herself by dowsing herself in kerosene and setting herself alight. Ivy is one of the aborigines in the girls’ orphanage in the mission. When others follow the example of Ivy’s mother, Ivy is partially blamed saying that she is accursed or that her family has the sickness. She is abused by the other girls but also sexually abused by the white married director of the orphanage. We see her many years later when she is in an institution, unable or unwilling to speak, and then jump further ahead, where we meet her daughter, Mary, who has been adopted by a white family and is unaware of her antecedents till after her adoptive parents’ death. She then becomes involved in aboriginal politics. While certainly a polemical novel about the treatment of aborigines in Australia, it is also a well-told story, well worth reading.