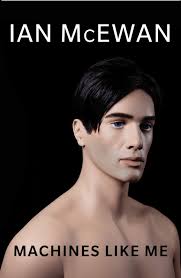 The latest addition to my website is Ian McEwan‘s Machines Like Me. As the title implies, this is about robots. Set in an alternative 1982 where Thatcher has lost the Falklands War and Alan Turing did not kill himself but invented the Internet, it tells the story of Charlie Friend who, with an inheritance, bought one of a batch of twenty-five robots, called, imaginatively, Adam. (The females, which sold out at once, are called Eve). We follow Charlie’s relationship with Adam, not as simple as he thought it was going to be, and with Miranda, the woman who lives upstairs. Throw in Miranda’s past (revealed to Charlie by Adam) and ab abused child whom Miranda would like to adopt and we have a complicated plot. However, the main issue is, are robots sentient beings, should we treat them as such and can they learn what we have learned – the good, the bad and the ugly – and adapt accordingly? This is McEwan’s best book for a whole and well worth reading both for the story and the issues it raises.