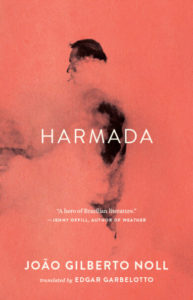 The latest addition to my website is João Gilberto Noll‘s Harmada (Harmada). This is another strange novel from the Brazilian writer. We follow an unnamed man, a former actor, as he drags himself round an unnamed country, capital Harmada, with a few strange, unexplained adventures. He will end up in a homeless shelter, where he spends many years. A young woman in distress, Cris, arrives at the shelter. He had met her as a baby when he was involved in a sexual escapade with her mother. He now returns to the stage, directing Cris in a monologue, which has some success but still things do not go well for him. It is a grim, dark and decidedly strange novel.