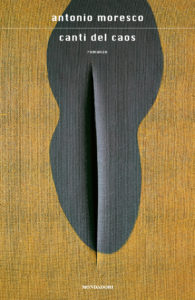 The latest addition to my website is Antonio Moresco‘s Canti del caos [Songs of Chaos]. This is the second book in his monumental trilogy. The book weighs in at well over a thousand pages and has not been translated into any other language. We follow the publisher of this book struggling with writing the preface to this novel before it is written and an advertising agency discussing the mechanics of the book, before taking on a new client – God – who wants to sell the planet as he is fed up with it. But to whom can they sell it? At the same time a software designer is designing, the writer is writing and various numbers of characters both appear as characters in this book as well as characters in the book being written and the software designer’s video game. When God gets really fed up, he decides to uncreate and immobilise the world and then things really get chaotic. It is complex, post-modern, madcap, pretty well incomprehensible in parts and a thoroughly original masterpiece, but unlikely to appear in English.