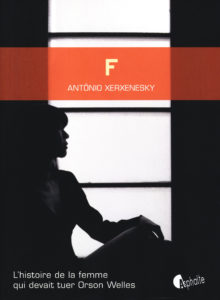 The latest addition to my website is Antônio Xerxenesky‘s F. It tells the story of Ana, a young Brazilian woman who travels to Los Angeles to meet her uncle, a former anti-Brazilian government guerrilla. He realises that she is a superb shot and has her trained with guerrillas in Cuba. She then becomes a contract killer. Much of the book concerns a specific assignment she has been given, namely to kill the very real film director and actor Orson Welles. Neither she nor we know why. What we do know is that she has been instructed to make his death look like an accident and to to kill him on 10 October 1985, which, not surprisingly, turns out to be the real date Welles died (allegedly of a heart attack). Inevitably, things are not as straightforward as they might seem. Sadly, this book is not available in English.