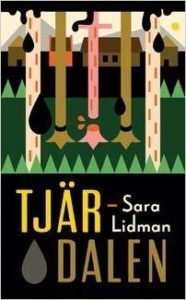 The latest addition to my website is Sara Lidman‘s Tjärdalen [The Tar Still]. This is Lidman’s first novel, telling the story of a remote Swedish village. Nils has spent a long time building a tar still, from which he hopes to make some money. However, just before he is to light it, he finds it destroyed. The culprit, Jonas, is lying in the ruins, badly injured. Jonas had worked for Nils and they had had a run-in and this is Jonas’ revenge. The villagers reluctantly look after Jonas but Nils has something of a breakdown. Petrus, a good but flawed man, tries to comfort Nils but Nils has a fit. Blom, the evangelical, says it is the work of the devil, Petrus says it is an epileptic fit. The second part of the novel is about the struggle for soul of the village between Petrus and the evangelical Blom. Lidman writes a fine novel, not getting carried away, but making her point.