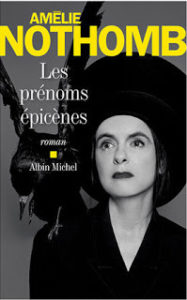 Latest on my website: Amélie Nothomb‘s Les prénoms épicènes [The Epicene First Names]. This is a Nothomb parable, telling the tale of a couple with epicene first names, (names which can be used for either sex) and their daughter called Epicène. He (Claude) had seduced her (Dominique) and persuaded her to marry him and move with him to Paris (from Brest). She could not get pregnant for a long time but, when she did, she had a daughter whom they called Epicène. However, there is considerable antipathy, turning to hate, between father and daughter, and things only get worse, till we learn of a dastardly plot by Claude at the expense of his wife and daughter, for which he will have to pay a high price. As always, Nothomb tells her tale well and makes her point.