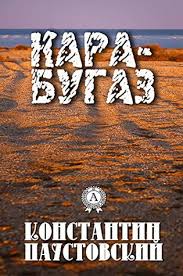 The latest addition to my website is Konstantin Paustovsky‘s Кара-Бугаз (The Black Gulf). Paustovsky is best-known in English and in Russian for his six-volume autobiography Повестью о жизни (Story of a Life) but he did write several novels, two of which have been translated into English. This one is sadly long since out of print but is well worth reading. The hero, for want of a better word, is the eponymous gulf, called Kara-Bugaz in this book (which is a transliteration of the Russian title) and Garabogazköl by Wikipedia. It is a lagoon off the Caspian Sea, in a very inhospitable part of the world. The novel describes the various people (Russian) who explored and exploited the area. All, of course, are somewhat eccentric and all have their own views on what is appropriate for the area. Some of the visitors were unwilling, such as the Communists deposited there without food and water by the White Russians during the Civil War, and left to die. Most do but not all. While these novelised stories of real people are fascinating, we also follow the lagoon itself, which is like a malicious spirit, threatening, dangerous and unpredictable. This novel was recommended in an excellent article by translator Will Firth.