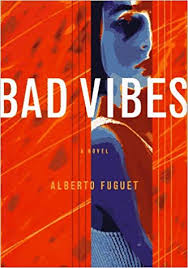 The latest addition to my website is Alberto Fuguet‘s Mala onda (Bad Vibes). This novel had considerable influence in Chile, dealing as it does, with a rebel without a cause, seventeen-year old Matías Vicuña, who comes from a well-to-do Pinochet-supporting family and is disenchanted with his life, his family, his school and even, to some degree, his friends. He does drugs, drinks, plays truant, has casual sex (though he is in love with Antonia, who finds him too self-centred) and has no idea of what he wants or where is going. A brief fling on a school trip to Rio, reading Catcher in the Rye and an interest in his newly discovered Jewish heritage are the few things that seem to arouse him. The entire story is told against the background of the 1980 Chilean constitutional referendum, though Matías himself, too young to vote, is indifferent to it. As a teenage angst novel, it is like others we have read but interesting as a portrait of disaffected Chileans of the 1980s.