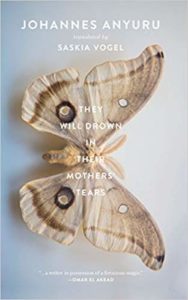 The latest addition to my website is Johannes Anyuru‘s De kommer att drunkna i sina mödrars tårar (They Will Drown in Their Mothers’ Tears). Anyuru is Swedish but with a Ugandan father. He converted to Islam in 2007. We start with a terrorist attack on a bookshop in Gothenburg, where an author, Göran Loberg, who has caricaturised the Prophet Mohammed, is signing books. Two men and a woman carry out the attack. The woman claims she does not know her real name but is known as Nour. Only later do we learn the results of the attack, as we jump two years forward, where she is in an asylum for the criminally insane. She claims that she comes from an alternative future, where Muslims are brutally repressed, primarily because of the bookshop attack and murder of Loberg and others. In the real world, she came back from the future and prevented the murder of Loberg and others. But who is she? A famous Muslim author investigates. There are no easy answers, only that Sweden, in both the real and alternative world, is a racist country.