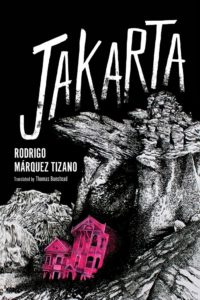 The latest addition to my website is Rodrigo Márquez Tizano‘s Yakarta (Jakarta). This is a dystopian novel from Mexico, describing a country called Atlantika, where a horrible epidemic, with the virus vector carried by rats, strikes the country regularly. The latest one – the Ź-Bug – has been brought under control but everyone knows another one will be back. The people have their bread and circuses in the form of a jai-alai type game, called Vakapý, played by robots, where statistics are very important and where a lot of people spend a lot of time and money on betting on it. Our unnamed narrator is part of a clean-up team and bets on Vakapý. He also has a girlfriend, Clara, who has found a strange stone which gives her and, later, him visions, possibly of a different future. But above all the novel is unremittingly bleak.