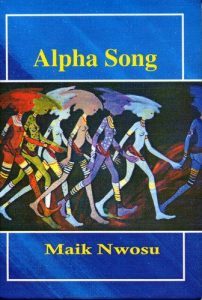 The latest addition to my website is Maik Nwosu‘s Alpha Song. Our hero, a Nigerian who adopts the name Taneba Taneba when he is estranged from his father’s family, never really finds where he fits in and where is going. His uncle gets him a job at the post office (twice) but that does not work out. He has various girlfriends but none seems to work out. His first wife dies, while he and his second wife, despite having a young son, split up, His friends die, go insane or just disappear. At the beginning of the book, he is forty-five, dying of an incurable disease, his system damaged by debauched living, writing a testament – this book – to his five-year old son, whom he does not see. It is a sad tale worsened by the fact that most of the other characters also struggle to find their place in the world.