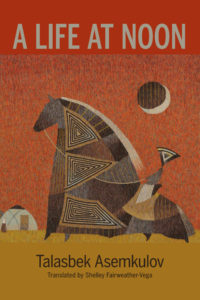 The latest addition to my website is Talasbek Asemkulov‘s Талтус (Полдень) (A Life at Noon). Talasbek Asemkulov is a Kazakh dombra player and has helped to revive the tradition, which had almost died, in Kazakhstan. This is an autobiographical novel. We follow the childhood and youth of Azhigerei, our hero, but we also learn of the horrors of the past under Soviet rule, including the Kazakh famine of 1932–33. Azhigerei’s father had fought against the Soviets and had spent twenty-two years in a prison camp. Azhigerei starts learning the dombra and we follow his increasing joy in the musical culture of his country as well as the other vicissitudes of his life. It is a thoroughly enjoyable glimpse into the culture of a country most of us will not be aware of.