I have just returned from a cruise down the Danube, into the Black Sea and up the Dnieper. Though this was not the purpose, there was a lot to see of literary interest. 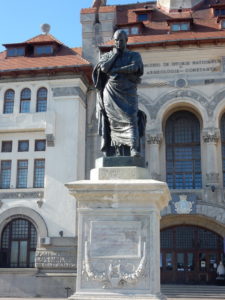 Only a small part of the journey was in Romania but we did stop at Constanța. In Roman times, Constanța was known as Tomis and it is famous, as it is where Ovid was sent into exile. You can see his statue in the town square (to the left) in front of the Archaeological Museum.

Ovid’s exile is something of a mystery. It is not clear why he was exiled. He himself said it was because of carmen et error, i.e. a poem and a mistake. The poem was presumably his Ars Amatoria though this had been written seven years before and was certainly not the first obscene Roman poetry. Other reasons suggested included that Ovid discovered that the Emperor Augustus had committed incest with his daughter Julia or granddaughter, also called Julia, or that Ovid himself had had an affair with one or both.

There are further mysteries. It was customary for the family of an exile to be sent into exile with him. However, Ovid’s wife, Flavia, stayed in Rome. It was also customary for his fortune to be confiscated but Flavia kept her husband’s fortune. Finally, though we know that Ovid died in Tomis, no-one knows where he was buried.

You can read more about Augustus in John Williams‘ novel Augustus. Quite a few novelists have written about Ovid and his exile. You can see my list of them here. Of the three that I have read, I particularly liked Christoph Ransmayr‘s Letzte Welt (The Last World).

From Constanța, we moved into Ukraine where our first stop was Izmail. Izmail is a pleasant town and, as it its name implies, it used to be Turkish. It is so small that it does not rate a mention in the Lonely Planet Guide to Ukraine. Its main claim to fame happned in 1790. During the Russo-Turkish War (1787–1792), the Turks tried to reclaim land lost to Russia. 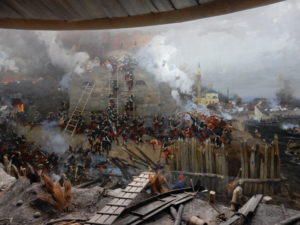 The Turks had a huge fortress at Izmail. The boundary was seven kilometres. It had massive bastions, a ditch eleven metres deep, filled with water to the height of a human, and part of it was protected by the sea. To make things more difficult, the Sultan informed the garrison that any man who surrendered would be beheaded. General Suvorov, victor of over sixty battles, planned a nine-point attack. On the right,above, you can see a diorama of the battle, from the local museum, where we got an excellent, detailed commentary on the battle. After hard fighting, the Russians won and there were relatively few Turks left for the Sultan to behead. 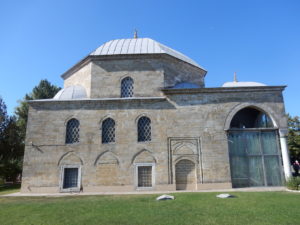 The fortress was destroyed after the Crimean War, when the victorious Allies made Russia dismantle such fotreses, so there there is nothing left to see, though the museum where the diorama is housed, is, in fact, in a former mosque which was there a the time (see photo above left).

The battle may not appear in Lonely Planet but it does get a mention on my website, as Mikhail Shishkin used it as a title for one of his novels, though the battle did not feature in the book. Rather it is used a metaphor for overcoming life’s problems.

Byron mentioned the real battle in Cantos 7 and8 of Don Juan:

So much for Nature: — by way of variety,
Now back to thy great joys, Civilisation!
And the sweet consequence of large society,
War, pestilence, the despot’s desolation,
The kingly scourge, the lust of notoriety,
The millions slain by soldiers for their ration,
The scenes like Catherine’s boudoir at threescore,
With Ismail’s storm to soften it the more.

You can read the entire cantos here and here.

Odessa has had many occupiers and many names in its history but was occupied by the Russians in 1789 and finally became Odessa. Catherine the Great was determined to have an all-year sea port so Odessa was key to her strategy. There is a statue of her in the town with four men beneath her. Three of these men contributed to the development of Odessa. The fourth, Platon Zubov, contributed nothing but, like the other three, he was her lover, aged twenty-two when she was sixty. 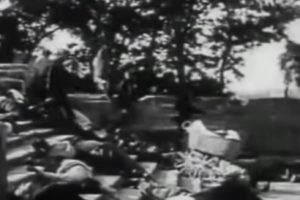 For Westerners, Odessa may be most famous for the Odessa Steps and the scene in Sergei Eisenstein’s film The Battleship Potemkin (named after one of the men on the statue mentioned above) where a pram roles down the steps, knocked by its mother after she falls, when shot by a Cossack. You can see a scene from it to the right, above and the whole sequence here.

Several famous writers were born in Odessa. They include the poet Anna Akhmatova, Leone Ginzburg, father of Natalia Ginzburg, Ilf and Petrov, Yury Olesha (born in nearby Elizavetgrad), Valentin Kataev and, in particular, Isaac Babel. He is known for his sharp humour, something Odessans still value and which they say comes from the Jewish population. Babel was and still is very much loved by Odessans. In English he is perhaps best-known for his short story collections Red Cavalry, which I can highly recommend. You can see a statue of him to the left. He was arrested in 1940 for being anti-Soviet, and shot.

Despite their own fine writers, Odessans are particularly fond of Alexander Pushkin. Pushkin spent thirteen months in exile in Odessa, where he wrote a lot including the first part of Eugene Onegin. There are two statues to Pushkin in the town. The one on the right is front of the Pushkin Museum. The other one is front of the Town Hall, but facing away from it. According to our guide, Odessans collected money for a statue but the town council refused to contribute, so the statue was built facing away from them. This is undoubtedly an urban legend, of which the Odessans are fond.

Pushkin is the only writer to have two statues in the town and the only writer to have his own museum. Anyone who has visited a museum or similar places in the Soviet Union or any of its successor states will be familiar with the imposing ladies who guard these institutions. insisting that you follow a set route and watching over you like a hawk to see that you do not take a photo or harm the exhibits. This was the case at several of the museums we visited though, I must say, the ladies at the Pushkin Museum were friendlier, doubtless because they were Pushkin devotees, eager to promote their hero.

The Pushkin Museum was located in the building where Pushkin lived and consisted of the furnishings, some of the books he owned (in English, French, Polish, Russian and Latin) and various other items. The captions were in Russian and Ukrainian but each room had a long blurb on the wall in English about the contents of the room. When one of the ladies found that I could speak some Russian, we were taken to a back room where they were about to have a concert. They were several portraits of Pushkin, his wife and four children and his parents and their families. There were also many photos of Pushkin statues around the world, including Asmara, Australia and New Jersey, as well as most of the major European capitals but not, I am ashamed to say, in London or elsewhere in the UK (though there is a Pushkin House (a place of meeting for people of all nationalities who are interested in Russian culture). 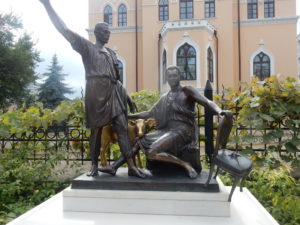 Though Pushkin is the only one to have his own museum in Odessa, there is a an Odessan Museum of Literature, devoted to writers associated with Odessa. I had not heard of most of them, but it was still fascinating to see the books, newspapers and magazines, photos and portraits relating to so many fine writers. The museum had a separate sculpture garden. The statue to the left above is of Ilf and Petrov and you can see the chair, representing their book Двенадцать стульев (The Twelve Chairs) and the golden head of the calf, representing their book Золотой телёнок (The Little Golden Calf; The Golden Calf).

Kiev (Kyiv) is a capital city that is growing rapidly, with rows and rows of very tall blocks of flats, both those in use and those under construction. 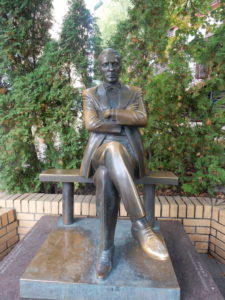 As you can see above, there are writers whom we know as Russian, who are in fact Ukrainian. There are two very famous Russian writers who are, in fact, Ukrainian. The first is Nikolai Gogol. The second is Mikhail Bulgakov. That is him to the right. 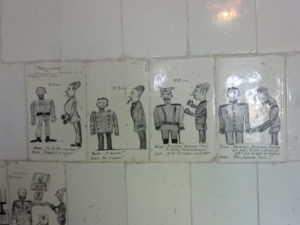 Bulgakov lived in a house on Andriyivskyy Descent, a winding street in Kiev. His former house is now the Mikhail Bulgakov Museum, which is well worth a visit. It is set out not only as he and his family lived in it but as it was for the Turbins, the characters in his play The Days of the Turbins, which Stalin saw fifteen times and which is based on his novel Белая гвардия (The White Guard). The drawings on the tiles to the left, above are his. 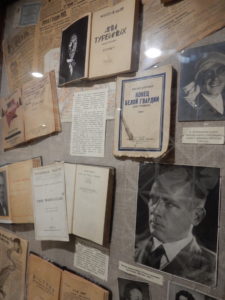 At the bottom of the street is the One Street Museum. This is a museum devoted to the inhabitants of the street and while I had heard of none, except for Bulgakov, there were many academics, scientists and intellectuals who lived there. The museum is well laid out with a display for each notable family, including the Bulgakovs. The picture to the right is part of the Bulgakov display.

I visited the National Museum of Ukrainian Literature. There was only one other couple there while I was there. The museum was located in a former Collegium, presumably something like a high school for rich kids. As with other museums, the captions were in Russian and Ukrainian but each room, devoted to a specific period, had a description in English of the contents of the room. I am aware of two writers born in Kiev – there are undoubtedly many more – Ilya Ehrenburg and Sigizmund Krzhizhanovsky.

The museum covered a range of periods, from very early medieval to early twentieth century. Some better-known writers such as Ivan Franko and Taras Shevchenko (there was a huge statue of him) featured prominently. 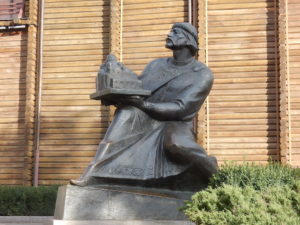 And to conclude, here is a statue of my favourite non-writer Ukrainian, Yaroslav the Wise, by the Golden Gate Museum. He seemed to be fairly ubiquitous. And it is a building, not a wedding cake that he is holding.