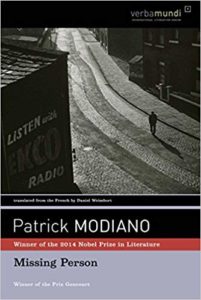 The latest addition to my website is Patrick Modiano‘s Rue des Boutiques obscures (Missing Person). It tells the story of Guy Roland, a man living in the 1960s who has no idea who he is. He has been working as the assistant for a private detective who has now retired. As a result, Roland concentrates on finding out who he is. He tracks down various people, sees photos, visits buildings and even goes to the Pacific to see if he can find any clues. He learns of various people whom he may have been associated with but some have died, others disappeared. He finds some connections. e.g. with fleeing France during World War II, but, as the title (a French translation of the Via delle Botteghe Oscure in Rome) tells us. Italy may or may not be key.