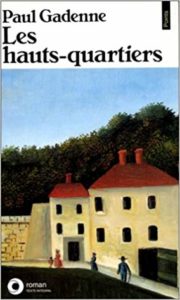 The latest addition to my website is Paul Gadenne‘s Les Hauts-Quartiers [The Upper Districts]. This novel was published seventeen years after Gadenne’s death and has not been translated into any other language. It is long (800 pages) and rambling. It tells the story of Didier Aubert, a young man clearly based on the author. We start with Dunkirk, as Didier and his mother flee the advancing Germans and escape to South-West France. Like Gadenne, Didier suffers from tuberculosis and like Gadenne is an ascetic intellectual. Didier struggles with finding suitable accommodation, struggles in his relationships and struggles with the bourgeoisie (whom Gadenne continually mocks), those who live in the Hauts-Quartiers, the posh part of town. He really wants peace and quiet for his studies but that is just not possible, as life gets in the way. It is considered by many critics to be a classic of twentieth-century French literature but perhaps needed a good editor.