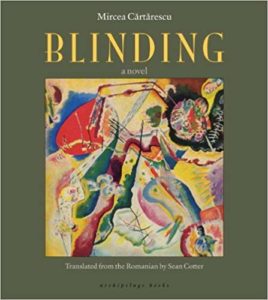 The latest addition to my website is Mircea Cărtărescu‘s Orbitor Vol 1, Aripa stângă (Blinding – The Left Wing), the first book in a trilogy (and the only one of the three translated into English). This is an intensely visionary book, far more intense than any other book you are likely to read, Dante included. The basic outline is a mixture of Cărtărescu telling his own story – the main character is a writer called Mircea – as well as the story of his family, including his ancestors, his attempts at writing and his view of Bucharest where he has always lived, both with his family and in his own as an adult. However, the main feature of the book is undoubtedly Mircea’s dreams, visions and images of his life, of the city and, in this book, of his hospital stay for facial palsy, which creates a work which has deservedly become a classic of modern European literature.