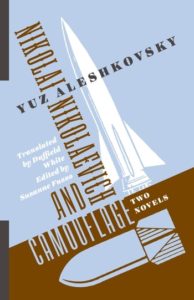 The latest addition to my website is Yuz Aleshkovsky‘s Николай Николаевич (Nikolai Nikolaevich) and Маскировка (Camouflage), published in the same volume in both Russian and English. Both are distinguished by vicious anti-Soviet satire and the extensive use of obscenities. Николай Николаевич (Nikolai Nikolaevich) is about the eponymous hero, a former prisoner, who finds work first as a laboratory assistant and then as the laboratory guinea pig, which requires him to masturbate every day, with his semen to be used to create a new race of humans to be sent into space. Unfortunately the laboratory gets caught up in the Lysenkoism issue and is closed down.

Маскировка (Camouflage) is about a fictitious town where nuclear arms are secretly made. The activity has to be disguised so camouflagers are used to pretend to be normal Soviet citizens, which is what the US spy satellites will see. Being a normal Soviet citizen means being permanently drunk and Fyodor Milashkin, our hero, does that very well, till he and the other members of his brigade are found by the police one morning having being anally raped. While mocking the Soviet drink culture, Aleshkovsky goes on to eavesdrop on a meeting of the Politburo Brezhnev, Kosygin and Co – and mercilessly mocks them. Both books are very funny, very obscene and very anti-Soviet,