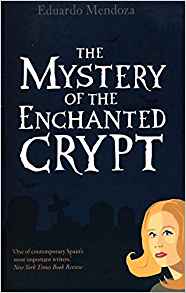 The latest addition to my website is Eduardo Mendoza‘s El misterio de la cripta embrujada (Mystery of the Enchanted Crypt). The novel, Mendoza’s second, is nominally a detective story. However, the detective is a homeless man who is on (temporary) release from a mental hospital. Under orders from the police, he is investigating the temporary disappearance and then reappearance of girls from a posh Catholic convent school in Barcelona. They are using him because of his connections to the underworld, though he soon finds out that it is more his cunning, lying, deception and ability to adopt multiple personalties that is of more use. Mendoza has great fun with the complicated and unpredictable plot and brings in a host of odd characters (our hero’s prostitute sister, a large Swedish sailor and a possible giant creature in the enchanted crypt of the title being just a few). Mendoza has said that this is his favourite of all his novels and you can see why, as it is great fun to read and must have been great fun to write.