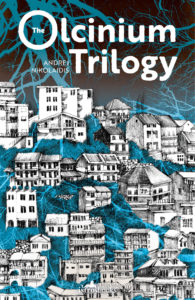 The latest addition to my website is Andrej Nikolaidis‘The Olcinium Trilogy ((Sin (The Son), Dolazak (The Coming), Devet (Till Kingdom Come)). This is a superb trilogy of novels, related but separate, about life in contemporary Montenegro. We follow three separate stories each one fairly grim, exposing the underbelly of post-Yugoslavia Montenegro, with a host of issues, ranging from massive conspiracies, corruption, spatio-temporal lapses, climate change and a general collapse into drug and alcohol abuse.They are mainly set in and around Ulcinj, where Nikolaidis lives, and they often delve into Ulcinj’s somewhat murky history. Nikolaidis tells his stories very well holding nothing back and, while, to quote the Independent newspaper reviewer, they may not be as cheerful as Samuel Beckett, they are certainly first-class novels,