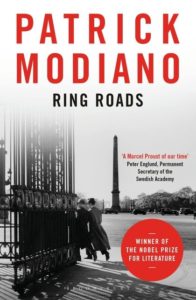 The latest addition to my website is Patrick Modiano‘s Les Boulevards de ceinture (Ring Roads). This is the third novel in Modiano’s Occupation Trilogy. The narrator, probably called Serge, a young novelist, first met his father when he was seventeen. The pair tried various nefarious scams, finally hitting on forged dedications in novels to sell to collectors. However, it seems that the father tried to kill his son. Ten years later, during the German occupation, the son has tracked down the father in a village. He is now involved with a group who appear to be both dealing in the black market and publishing a magazine which uses blackmail as a way of earning money. The father does not seem to recognise his son and the son does not introduce himself, though he gets involved with the group. Inevitably, things do not work out well, though we are never sure if the narrator is telling us the truth and what really happened.