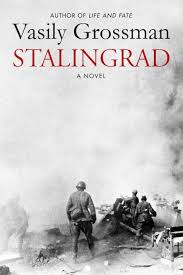 The latest addition to my website is Vasily Grossman‘s За правое дело (Stalingrad). This book was first published in the Soviet Union in Novy Mir magazine in 1952 and then in book form in 1954, soon after Stalin’s death, without which it may not have been published. Both versions were heavily censored. Only now, with the translators, Robert and Elizabeth Chandler, using Grossman’s original manuscript, has the book finally been published as Grossman intended it. The plot follows the situation in Stalingrad leading up to the Battle of Stalingrad and the beginning of that battle and immediately precedes the events taking place in Grossman’s famous Жизнь и судьба (Life and Fate). It is superbly told, as we see the action from all sides, both the ordinary Soviet citizen and those directly involved in the fighting whether as ordinary soldiers or senior officers, as well from the German side, including a couple of appearances by Hitler. By the time the book ends, the Germans have entered Stalingrad and are confident of taking it, with the Soviets offering fierce resistance but being pushed ever further back. It is brilliantly told, full of action and gives us a view of the Battle from all perspectives. It is destined to join Жизнь и судьба (Life and Fate) as a major Russian classic.