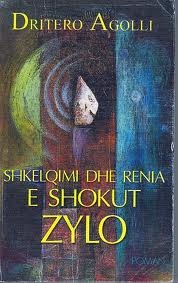 The latest addition to my website is Dritëro Agolli‘s Shkëlqimi dhe rënia e shokut Zylo [The Rise and Fall of Comrade Zylo]. This a witty satire on ambitious government officials. Comrade Demkë, our hero, is a civil servant in the Ministry of Culture, who would like to spend his time writing fiction but is obliged to spend his time writing reports for his seniors, for which they take all the credit. At the beginning of the book, Comrade Zylo has just become his new boss. Zylo is ambitious, very astute politically but full of useless ideas (he writes his Thoughts down on bits of paper) and the long-suffering Demkë has to do his bidding, often requiring late hours. However as the title tells us, Zylo gets caught out and we follow his gradual decline, though it is possible that he will somehow survive elsewhere. This book had great acclaim Albania for it s witty mockery of officialdom but, sadly, is not available in English.