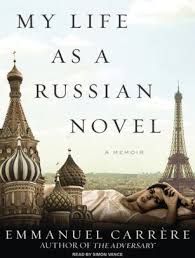 The latest addition to my website is Emmanuel Carrère‘s Un roman russe (My Life as a Russian Novel: A Memoir). Though the English calls it a memoir – and, to a great extent it is – it is written as a novel, called a novel by the author and the publisher and reads as a novel. There are three main themes, apart from the overarching theme of Carrère’s own somewhat chaotic life. The first is his journalistic investigation of András Toma, allegedly the last World War II soldier to be repatriated. Toma was held in a mental hospital in Russia for fifty-five years, as he did not speak Russian and no-one in the hospital spoke Hungarian. Carrère and a film crew twice travel to Russia and once to Hungary to investigate. We also learn about Carrère’s family, particularly his grandfather who was Georgian and who never fitted in when in France, and his grandmother who was descended from Russian aristocrats. Finally, we follow Carrère’s tempestuous love affair with Sophie. All three stories intertwine and Carrère tells his story very well, despite showing himself to be a very flawed character.