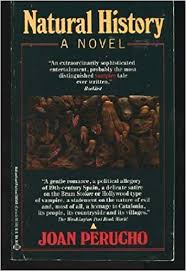 The latest addition to my website is Joan Perucho‘s Les històries naturals (Natural History). This is a spoof of the vampire story, clearly influenced by Hollywood/Hammer Horror, set in the First Carlist War (1830s). We follow the story of Antoni de Montpalau, a learned aristocrat, who takes the liberal side in the Carlist wars. He is interested in natural history, investigating various exotic and non-existent species, before setting out on the trail of a 700-year old vampire masquerading as a Carlist guerrilla, called The Owl, who is terrorising a local village and helping the Carlist cause. He makes common cause with the historical Ramón Cabrera, the enemy and, in real life, a very nasty man. It is all great fun and the ghosts of Max Shreck, Bela Lugosi and Christopher Lee would have enjoyed it.