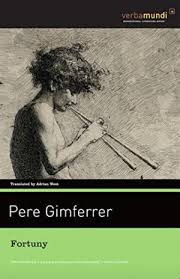 The latest addition to my website is Pere Gimferrer‘s Fortuny (Fortuny). Gimferrer is primarily a poet – he wrote only two novels – and this is definitely a poet’s novel. It consists of many small chapters, mainly set in Venice, sensuously described, generally involving historical people from Henry James to Julie Christie, from Émilienne d’Alençon, who appeared in À la recherche du temps perdu to Orson Welles, his love affair with Dolores del Rio and his film of Othello. All are linked by the Catalan Fortuny family, father, a major painter in his day Marià Fortuny, his wife, Cecilia de Madrazo (link in Spanish), whose father was a painter and who was a model for her husband, and their son, the designer Mariano Fortuny, who made his career in Venice. It is great fun, very poetic and very sumptuous but probably not really a novel..