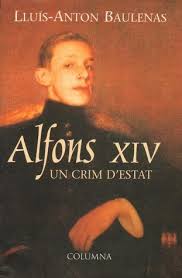 The latest addition to my website is Lluís-Anton Baulenas‘ Alfons XIV : un crim d’estat [Alfonso XIV: A Crime of State]. Though one of his novels has been translated into English, this one, sadly, has not. This one, set in 1962, tells the story of a Spanish general close to Franco, Pozos, and, in particular his assistant, Captain Tutusaus, a skilled killer, who are involved in investigating a potential heir to Franco. The man, a rich industrialist, is though he does not know it, a son of King Alfonso XIII, the last King of Spain before Franco, and, in theory the next in line to the throne. Franco has identified him as a possible heir rather than Juan Carlos (who, historically, became king after Franco’s death) and Pozos and Tutusaus have to check him out and then protect him from various enemies. There is a very complicated plot about how they try to do this which does not end particularly well for anyone. The character of Tutusaus is superbly done, a man fiercely loyal, yet a man of his own principles and some contradictions.