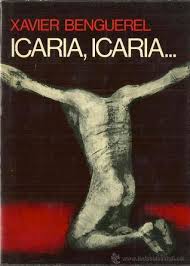 The latest addition to my website is Xavier Benguerel‘s Icària, Icària, a Catalan novel set in Barcelona in 1922 and in the United States some seventy-five years earlier. Clemente Rovira’s father has been arrested by the police, tortured and killed. He joins a group engaged in political assassinations, led by Aurelio who is now in a wheelchair. The assassination attempts do not, on the whole, go well. Aurelio tells them of Étienne Cabet and the Icarians. Cabet was a French socialist who tried to set up a socialist community in Texas. As we follow events in Barcelona in 1922, we also follow, at the same time, the attempt to set up the community in Texas and, later, in Nauvoo, Illinois. The whole exercise is an unmitigated disaster, badly planned and badly organised but with some connections to the Barcelona group. Benguerel seems to be saying that both these models – political assassination and idealistic socialist communities are doomed to failure. Sadly, the book appeared simultaneously in Catalan and Spanish but has not been translated into any other language since.