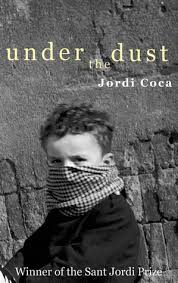 The latest novel on my website is Jordi Coca‘s Sota la pols (Under the Dust). This is a very grim fictionalised autobiography of a boy growing up in the slums of Barcelona during the Franco era. Our unnamed narrator lives in poverty (no running water in their one-room flat), with an abusive father. His younger brother dies of meningitis, his grandfather was shot at the end of the Civil War (though it is not clear why), he is bullied at school and, as his best friend succinctly puts it, life was shit. His only vague redemption is meeting an even poorer family who, at least, have some books and he is introduced to Crime and Punishment and Robinson Crusoe but even there, he seems to abandon reading. His father falls out with his brother – they are running a business together – and is also in trouble with the law. There seems to be no hope of escape, with only the prospect of a badly paid job ahead.