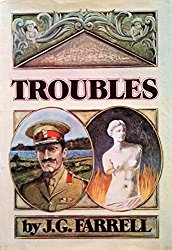 The latest addition to my website is J. G. Farrell‘s Troubles. This novel, which won the Lost Man Booker Prize more than thirty years after the author’s death, is the first in Farrell’s acclaimed Empire Trilogy. It is set in the crumbling Majestic Hotel, a symbol of the decaying British Empire, located in County Wexford in Ireland, at the end of the First World War and during a period when unrest in Ireland is increasing. Major Archer, who had been invalided out of the army for what we would call post-traumatic stress disorder, seems to have accidentally got engaged to Angela, daughter of the owner of the Majestic and goes to stay with the family there, her father, staunchly opposed to any Irish independence, her irresponsible brother and her almost evil twin sisters. He barely sees Angela, who is ill, but watches as both the hotel and British rule in Ireland, crumble in synchronicity. It is a superb novel and deserves the reputation it had when it first came out.