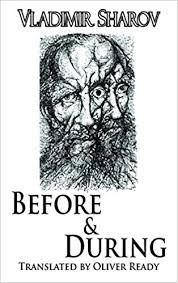 The latest addition to my website is Vladimir Sharov‘s До и во время (Before and During). This book was written immediately after his Репетиции (Rehearsals) and covers some of the same topics, namely the subverting of Russian history, particularly the Russian Revolution, and the idea of a Christian Utopia. Our hero is Alyosha who, as a result of a fall, has blackouts and is admitted to a mental institution, which has had a colourful history. He had, before admittance, had the idea of writing a Memorial Book, about people who would otherwise have been forgotten (based on an idea by Ivan the Terrible!) and now decides to do the same for the residents of the hospital. However, one of the residents tells him a highly imaginative version of the story of Germaine de Staël who, amongst others things, was the midwife of the Russian Revolution, the biological mother of Stalin and lover of the composer Alexander Scriabin, who was actually born fifty-five years after she died. It is all Sharov’s way of using Russian history in a highly creative way to show his ideal of a Christian Utopia but, at the same time, makes for a really fascinating read.