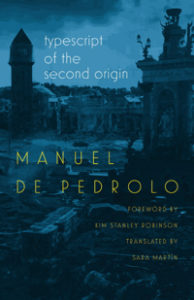 Could this be the year of Manuel de Pedrolo, the great Catalan science fiction writer? His best-known novel Mecanoscrit del segon origen (Typescript of the Second Origin) is finally being published in English this April.

As this article shows (link in Spanish), it is going to be The Year of Manuel de Pedrolo in Spain.

De Pedrolo was very prolific, writing poetry, theatre, short stories, novels and articles in the press. He also translated novelists such as John le Carré and Georges Simenon. He was ahead of his time, anti-capitalist and in favour of Catalan independence when neither view was fashionable or, indeed, safe. He only wrote in Catalan, never in Spanish. Because of his themes – sex, violence, anti-capitalism – he was a victim of Franco’s censors.

Now his house is to become a museum, thanks to the efforts of his daughter, Adelais. There will various events to celebrate his work and his life. Much of his writing will be digitised and made available on line. And, as mentioned, English-speaking readers will be able to discover why he is revered in Catalonia.