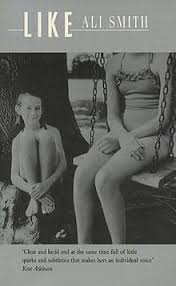 The latest addition to my website is Ali Smith‘s Like. This is Ali Smith’s first novel and a very accomplished novel it is. It tells two related stories. Amy was destined for an academic career at Cambridge University. She had had lesbian relationships and, in particular, she was having an on-again off-again affair with Aisling McCarthy, a Scottish woman. It all went drastically wrong. Amy has had a breakdown and now is living in Scotland with her seven-year old daughter, Kate, working on a caravan site and apparently unable to read. Aisling McCarthy went on to become a famous actress but seems to have dropped out. We follow her lesbian relationships at school, culminating in her meeting Amy, and later following Amy to Cambridge, where she causes the downfall not only of Amy but another woman with whom she had had an affair. The story is narrated from the present day, first by Amy and Kate and then by Aisling. Smith tells an excellent story and pulls us into the story of the two women and young girl.