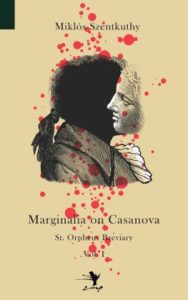 The latest addition to my website is Miklós Szentkuthy‘s Széljegyzetek Casanovához (Marginalia on Casanova). This is the first in series of ten novels (incomplete at the time of the author’s death) written over a period of fifty-four years, albeit with a thirty year gap because of the political situation. It can best be described as a romp through European history. This novel, the only one so far translated into English, is, as the title tells us, about Casanova and is the author’s highly idiosyncratic commentary on Casanova’s Memoirs (the German version). While Szentkuthy does not shy away from Casanova’s amorous exploits (the book was banned when first published), he is equally interested in Casanova’s thoughts, Casanova’s Venice and Casanova’s era and draws in comparisons from pre-Casanova period and the modern period. He frequently gets carried away with his comments but manages to produce a highly learned work, full of erudite commentary, as well as a highly enjoyable, witty and colourful work.