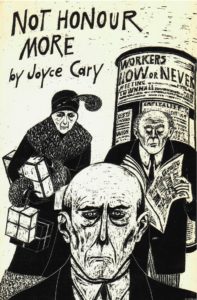 The latest addition to my website is Joyce Cary‘s Not Honour More. This is the third in Carey’s second trilogy and definitely the weakest. It follows on from the first – Prisoner of Grace – and is narrated by Jim Latter, former soldier and colonial officer, married to Nina, née Woodville, who had been married to the Liberal politician, Chester Nimmo, for a long time. Chester now Lord Nimmo is still living with Latters and Latter suspects him of having an affair with Nina. Meanwhile the 1926 General Strike is starting and Latter is called on to organise the Specials (auxiliary police force) while Nimmo sees it as a way back into politics. Of course, it all goes badly wrong for all of them. With Latter being a most unsympathetic character, volatile, jealous and full of his own self-importance, his narration does not endear him to us nor does it make for as an enjoyable book as its predecessors.