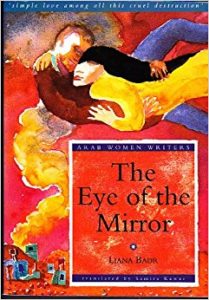 The latest addition to my website is Liana Badr‘s رج عين المرآة (Eye of the Mirror). This novel is set in the Tal el-Zaatar refugee camp in the mid-1970s and recounts the events of Siege of Tel al-Zaatar, as seen through the eyes of one Palestinian family and, in particular, the eldest daughter, Aisha. Aisha had been working at a convent in return for an education but is pulled out following the Ain el-Rammaneh bus massacre. She lives with her hard-working mother, her abusive, alcoholic, lazy father and her two younger siblings. As the siege intensifies, life becomes harder. Aisha falls for a guerrilla but he is promised to someone else and she is forced into a marriage with one of his comrades. She resists but cannot prevent it. Medicine, food and drinking water become harder to obtain, most of the men are killed and Aisha, as a Palestinian and woman, knows her life will be one of suffering. There is nothing positive to take from this novel, not least as we know, twenty-six years after its publication, things have not improved and the prospects for an independent Palestinian state are as remote as ever.