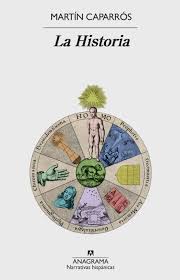 The latest addition to my website is Martín Caparrós‘ La Historia [History]. This massive novel – over a thousand pages long – was first published in 1999 but only in a very limited print run, so it has been very difficult to obtain. Anagrama have now published it in a larger print run. It is essentially a foundation myth for Argentina, inventing an entire civilisation located where the now extinct Calchaquí lived and tells of their complex and advanced culture. It is based on a manuscript found by a modern Argentinian, Mario Corvalán-Ruzzi, in a (fictitious) French château and written in French. Corvalán-Ruzzi has tried to track down the original Spanish, written by a Spanish monk taking dictation from Oscar, a man waiting for his father, the current king (or Father, as they call them) to die so that he can succeed. As he has been unable to find a Spanish version, we are presented with his translation of the French into Spanish, complete with very detailed notes. He outlines the history of the culture (called only The City and the Lands) and their often (to us) peculiar customs and behaviours. We follow them, indeed, from their founding by Albert, the first Father to Oscar, the twenty-first and last, as well as learning much about them. It is a brilliant and thoroughly original work, giving us the portrait of a civilisation that is very different from ours, though not without some similarities. I would like to hope that it might one day make it into English but I am not optimistic. Whether it does or not, it will be one of the great modern classics of Latin American literature.