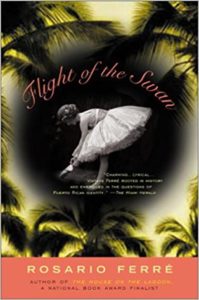 The latest addition to my website is Rosario Ferré‘s El Vuelo del Cisne (Flight of the Swan). The story is about a Russian ballet troupe which is in Puerto Rico when the Russian Revolution breaks out, meaning they cannot return to Russia but, as they are stateless, may not be allowed to stay in Puerto Rico. The troupe is led by a lady known as Madame to Masha, the narrator. Madame – Niura Poliakoff – has a poor background, the illegitimate daughter of a laundrywoman, but her father was well-off and his family paid for Niura to go to ballet school. She became a great success, and even danced with Nijinsky but now has her own ballet company, managed by her rich (but not as rich as she thought he was) husband, Victor Dandré. While in Puerto Rico, Niura has an affair with a man half her age and she and the company get mixed up in the anti-American politics. It all ends somewhat chaotically with terrorists/freedom fighters, a Lindbergh-like pilot and passion galore. The comparison between Puerto Rican and Russian culture is brought out, in particular their common points, namely sexual passion and hatred of oppression.