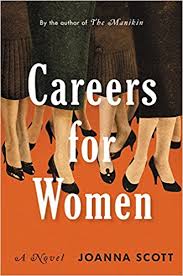 The latest addition to my website is Joanna Scott‘s Careers for Women. This is another first-class novel from one of the United States’ leading novelists, who does not get the attention she deserves. As the title of this one shows, it is about sexism and, in particular sexism in the workplace, though it is also about a lot of other things. It starts in the late 1950s, when the very real Lee K Jaffe is head of the public relations department of the New York Port Authority. It is Jaffe who will push for the construction of the twin towers of the world Trade Center. Jaffe has a heart and hires a woman, Pauline Moreau, who has been arrested for prostitution, to the disgust of Maggie Gleason, the narrator and her colleagues. Maggie soon becomes close to Pauline and looks after Sonia, Pauline’s handicapped daughter, a role she takes on full-time when Pauline mysteriously disappears. At the same time, we are following the events at Alumacore, an aluminium manufacturing plant in Visby, in remote upstate New York, whose managing director, Bob Whittaker, had previously had an affair with Pauline and is the biological father of Sonia. We follow the story of what happened to Pauline, as well as the construction of (and, right at the end, destruction of) the twin towers. As well as these plot lines and the issue of sexism and (lack of) careers for women, Scott raises a host of other issues, including corruption, corporate bullying, massive pollution and anti-Semitism, all the while giving us another excellent novel.