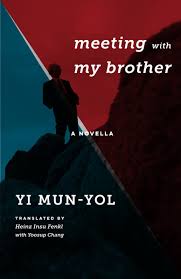 The latest addition to my website is Yi Mun-Yol‘s 아우와의만남 (An Appointment with My Brother; later: Meeting with My Brother), a new translation of a book that was previously published in English as An Appointment with My Brother. It is partially based on the life of the author. In real life, his father defected to North Korea during the Korean War, leaving his wife and three children. The family never saw him again but later learned he had married and had five children. In this book, the protagonist, Professor Yi, plans a meeting with his father in Yanji, a Chinese town just over the border from North Korea. He hires an intermediary to make contact but, before the father is tracked own, he has died. Instead, as the title tells us, he meets his half-brother instead. Not surprisingly, relations between the two half-brothers from two related but very different countries are not entirely easy. Yi Mun-Yol, one of Korea’s foremost writers, tells a superb story of a country separated by ideology and the problems this causes for families, without being mawkish or overly sentimental.