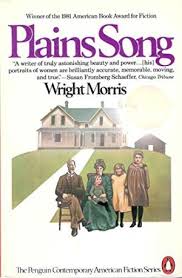 The latest addition to my website is Wright Morris‘ Plains Song: For Female Voices. This is one of Morris’ last novels and tells the multi-generational story of the Atkins Family. Cora has married Emerson, after a very brief courtship, and then joined him and his brother, Orion, who are homesteading land out West. The families tend to have daughters and Cora has one daughter, Madge, who is overweight and quiet as a child a as an adult. Orion marries Belle, something of a hillbilly, and they have three daughters. The middle daughter dies when very young and Belle dies giving birth to the youngest one. However, it is the eldest daughter, Sharon, who is key. She is more boisterous and more independent than her cousin, Madge, and, to a certain degree, clashes with Cora. In particular, a strong contrast is made between Cora, the steadfast pillar of the family, and the more flamboyant Sharon, who leaves the area, has a musical career and never marries. We also follow the changes, both in the individuals and in the world around and the effect this has on the various characters. This is an excellent swansong to Morris’ work, focussing on the women over several generations.