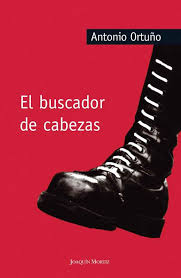 The latest addition to my website is Antonio Ortuño‘s El buscador de cabezas [The Head Hunter]. This novel tells the story of Alex Faber who gets involved in the extreme right in an unnamed Latin American country. As a teen he joined a group, the Republicans, which seemed to enjoy attacking prostitutes, gays and so on but later left to go to university to study journalism. At the beginning of the novel he is a journalist for a fairly liberal paper called El Futuro. He has to deal with a story involving an attack on a blasphemous work of art, which resulted in the killing of the art gallery guard. First the killers, let out on bail, are killed and then the artist and his family are brutally murdered. The right, led by Guadalupe Garza, head of an organisation called Clean Hands, start doing well and Garza stands for the presidency and, eventually, wins. Meanwhile, Alex has rejoined the Republicans and is involved in some of their dirty deeds. As the book opens with his exile in another country and his comment that he lost his war, we know this is not going to go well. Ortuño who, sadly, has not been translated into English, tells an excellent story on the rise of the extreme right, as seen from the perspective of a conflicted young participant.