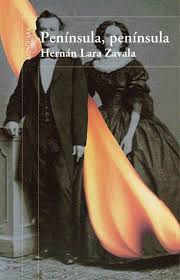 The latest addition to my website is Hernán Lara Zavala‘s Península, Península [Peninsula, Peninsula]. This novel, set in the mid 1800s, concerns a native uprising in Yucatán, a result of the mistreatment of the native population by the whites. Lara Zavala tells his story using himself (we learn about his writing process and thoughts) but also using the writings of José Turrisa, pseudonym of Justo Sierra O’Reilly, a lawyer, but, in this book, they are two separate people. We follow not only the view of the two novelists but of several characters who were there, including an English governess, an Irish doctor, a Mexican travelling salesman and a crooked Mexican lawyer. We also see the disputes between the Mexican politicians and even the disputes within the Mayan camp, all of which makes for a very lively story. Lara Zavala and, indeed Turriso, are very sympathetic towards the plight of the Mayans, who have been exploited and mistreated, an issue which has not gone away.