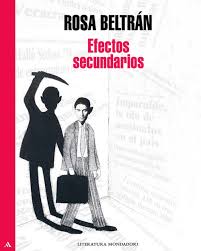 The latest addition to my website is Rosa Beltrán‘s Efectos secundarios [Secondary Effects]. This relatively short novel packs a lot in. It tells the story of a woman (though initially identified as male) who introduces authors and their new books at book launches open to the public. The books are self-help or similar second-rate works, which she despises. She, however, is a devotee of quality fiction and soon finds herself wholly identifying with writers such as Kafka, Joyce and Wilde and their characters. At the same time, she is focussing on the brutal drug war in Mexico, the many horrible deaths resulting from this war and the sufferings, in particular, of women because of this. She soon starts associating the poor quality books she has to read and present with the state of affairs in Mexico and finds quality literature as a release from this. When, at a presentation, she finally breaks out somewhat, showing how women have suffered in Mexico and how women writers have also suffered, the positive reception leads her to hope that things might improve. They do not. This is a first-class and complex work about the current situation in Mexico which sadly has not been translated into any other language.