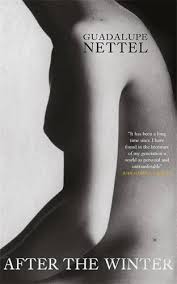 The latest addition to my website is Guadalupe Nettel‘s Después del invierno (After the Winter). This novel tells the story of two very different people. Claudio is Cuban and lives in New York. He is ascetic and rigid in his ways. He works as a book editor and has a lover fifteen years his senior, whom he does not treat particularly well. Cecilia is Mexican. Her mother left when she was young. She had studied French literature and is now in Paris studying. She has virtually no friends and is not particularly happy. She meets the man in the room next to her, Tom. They become friends (but not lovers) till he disappears to spend extended time in Sicily. Inevitably, Claude and Cecilia will meet, which they do, in Paris. They both fall in love with one another at first sight, which is very uncharacteristic for him (I want to be a robot and not a man is his clarion call). Things do not work out, tragedy strikes and life goes on. This not a bad book and we must be grateful for not giving us the obvious story once they meet. The image of death pervades the novel, not least because Cecilia and Tom are both somewhat obsessed with cemeteries and Claudio is mildly interested in the idea. The book will appear in English translation in September of this year, published by Maclehose Press.