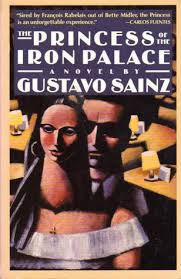 The latest addition to my website is Gustavo Sainz‘s La princesa del Palacio de Hierro (The Princess of the Iron Palace). Sainz was part of the Onda movement, a literary movement that rejected the formal and conservative writings of previous Mexican authors and adopted a colourful language, using lots of slang and vulgarities, and openly discussed sex, drugs and politics. This story is narrated by the unnamed heroine, the eponymous princess, who comes from a rich family and is expected to behave like a lady at all times. She does not. She has numerous boyfriends, with whom she has sex, takes drugs, drinks heavily and lives a very wild and chaotic life. Above all, she tells stories of her highly colourful life, which involves a series of boyfriends, most of whom seem to have dubious and often criminal backgrounds, a continuous wild ride and even a job, working at the Mexican department store, the Palacio de Hierro (Iron Palace). The novel is a continuous stream of events, stories, mishaps, violence, and lots of sex and drugs. It is a highly colourful and enjoyable novel, in that it never lets up for a minute, as she jumps backwards and forwards, in time and place, lives what can only be described as a totally chaotic life and somehow manages to survive car crashes, drug overdoses, difficult boyfriends, a sexual assault by a government minister and a life too well-lived.